How to Care for a Burmese Cat 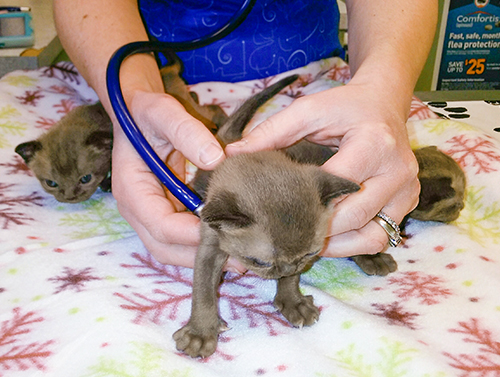 Burmese love to be handled. They like being carried around, either in the crook of the arm or on the shoulder. Some Burmese are definitely shoulder cats, so it is important to warn unsuspecting visitors that a Burmese can easily jump on someone’s shoulder from the floor.

These are low maintenance cats, which do not require combing or bathing or any unusual handling. The coat is kept in condition by simply stroking it with your hand and occasionally with a rubber brush, just to remove dead hairs. The rubber brush is recommended in late spring, when all cats shed out their winter coat.

The most important aspect of care is providing high-quality, premium cat food. Quality food is reflected in the high shine of the coat and the tight, muscular body and definitely influences the overall appearance. One or two bowls of dry food and water should always be made available. Quality dry food is important for keeping teeth and gums healthy, and also for maintaining good muscle tone. Quality canned food can be used to supplement dry food. The best way to avoid making a Burmese a finicky eater is to provide variety in his meals and not allow the cat to become addicted to one particular food. Kittens should be allowed to eat as much as they want. Adults should not be allowed to become seriously overweight by over-feeding. If an adult bulges out beyond the hips on the side, or if the belly has a noticeable hang, then the cat is overweight and must be fed less food. Good veterinary care is important for all cats. It is very helpful to find a veterinarian who has treated Burmese cats before and understands the breed. 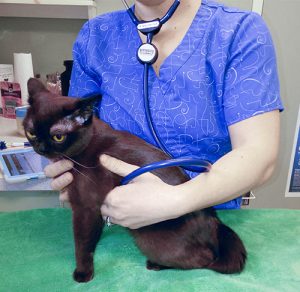 New owners of Burmese need to be aware of one aspect of their personality: they resist strong restraint. A Burmese will resent being held with force in order to do something possibly unpleasant such as a trip to the veterinary clinic. The least amount of restraint necessary is always the best approach with this breed. It is also a good idea to get a Burmese used to such events as getting nails clipped or being transported in a cat carrier. These and other activities not to their liking should be introduced in short spurts as soon as possible, even if the cat is still a kitten.

Because Burmese often form a strong attachment to their environment as well as to their human family, moving to a new house requires a period of adjustment, until they feel as comfortable in their new environment as they were in the previous home. This usually takes one to three weeks.

Burmese should not be confined and separated from human contact for more than a few hours at a time. They crave human contact and if they are denied it for long periods, they will become withdrawn, and may even lose their affectionate personality. Breeders recommend that people who work full-time and are away from the house for several hours every day get a pair of kittens or start with an adult Burmese. It is easier and more fun to have two Burmese than one. Not only will they keep each other company but keep each other from becoming bored as they provide endless entertainment for themselves through their play.

How to Select a Kitten

When selecting a pet kitten, bear in mind that Burmese are slow to mature which makes them look smaller for their age than most other breeds. A Burmese should be at least three months of age before going to a new home as a pet and should weigh approximately three pounds. Because of their slow maturation, kittens younger than three months are simply not physically and socially mature enough to leave their mothers. Kittens should be totally healthy – that means no sneezing, no congestion in the nose or the chest, no diarrhea. The breeder should give you a health guarantee in writing. Kittens should have had at least two, preferably three vaccinations that protect from distemper and upper-respiratory diseases.

Do not be concerned if a Burmese kitten has a discharge from its eyes. Since Burmese eyes are very large and somewhat protruding, blinking generates a clear discharge as a mechanism for clearing the large surface. Sometimes the discharge coagulates into a small brown ball at the inner corner of the eye. Although this is normal and not harmful, it is best to gently remove it with a tissue. A small, clear discharge is normal but a white or yellow discharge is not, and should be looked at by a veterinarian.

Burmese kittens do not reach their full adult color until they are approximately one year old. Sable brown kittens, for example, are medium beige when they are born. They will darken to a light to medium brown by three or four months of age but are still a long way from the rich, dark-chocolate adult color. The dilute colors of champagne, blue and platinum follow a similar darkening process.

If a family is acquiring a second Burmese kitten, one of the opposite sex will be the easiest to introduce, and will lead to a charming relationship of the two cats.

How to Find an Adult Burmese Pet

There are two major sources for finding an adult Burmese as a pet. First is the Burmese Rescue program. New homes need to be found sometimes for Burmese when the current owners, for whatever reason (economics, a transfer to a foreign location, death of the owner) must give up their cats. The Burmese Rescue program is contacted by the families, or in some cases veterinarians or animal shelters. The program finds immediate foster homes for these cats and obtains whatever veterinary care is needed to ensure that they are in good health. These cats are then made available for adoption into new, permanent homes.

A second source for adult pets are the breeders of Burmese. Breeders retire their breeding and show cats often at quite a young age. A beautiful adult makes a great pet, is usually less expensive than a kitten, and has many years ahead to be a happy member of a new household.

Burmese generally are quite long-lived, often well into their teens, and age gracefully. It is almost impossible to tell whether an adult is four or twelve years old because they appear to be in their prime for a long time. Most Burmese develop white whiskers in the later years, but this is often the only indication of their advancing age. Some of the most famous show winners and prolific studs have lived to be eighteen and nineteen years old. They usually enjoy good health until near the end of their lives. Generally, they have just a few months at the end with reduced physical capabilities. Older Burmese are usually very sweet, very needy of their people, who respond with great dedication and affection to these cats that have given them so much happiness.